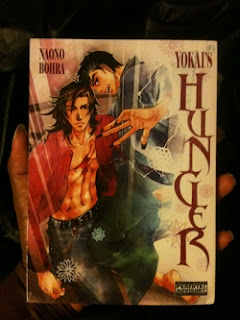 Basic Premise
Norito Ogami is alone. He wants it that way because people who get close to him always get hurt… until he meets Koma. But they’ve met before in a past life when Norito was named Oshu and he made a pact with Koma to be together forever. A pact that is put to the test when demons attack to get Koma’s powers, and Koma’s siblings appear along with an ancient enemy that wants to see them all dead.

Review
This is my first time reading a story by Bohra-sensei. I liked it. I had to get over the fact that Koma is a “middle-aged” man. Now normally that wouldn’t faze me in the least. It happens a lot in BL/yaoi — older man with a much younger partner. BUT usually the older man is the seme (top), NOT the uke (bottom). This was a first for me.

As I read more of the book, the relationship dynamic grew on me. I’m not saying I’ll hunt down other BL/yaoi stories with the same dynamic, because I won’t. Bohra-sensei just presented a story that was so intriguing that I was able to look past that small detail.

My favorite character is Akakagachi, Koma’s older brother. He is hilarious. He added the needed comedic element to this story. I actually love all of Koma’s brothers. I hope Bohra-sensei did stories for them, and that I can find them.