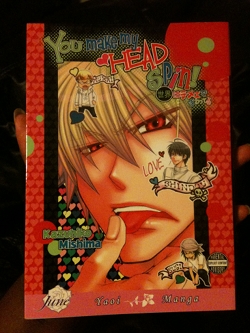 You Make My Head Spin! by Kazuhiko Mishima

Basic Premise
Shindou is a new transfer student to a school known for its delinquent students. That’s where Shindou meets Yousuke, a rough and ready type looking for a fight around every corner… or is he. Shindou knows there is more to Yousuke than he lets on and Shindou is just to man to find out what.

Review
I’ve read a few of Kazuhiko-sensei’s works. I’d say Kazuhiko-sensei is in the middle for me — entertaining stories but not an author I would break my butt to read.

First, I would like to say that this manga got its Mature rating from the amount of f-bombs sprinkled liberally throughout NOT because of any sex shown. I’ve never seen a manga with so much cursing before.

Second, Shindou and Yousuke’s story needed to be more fleshed out. They fell into bed way too fast. For most yaoi/BL stories, that’s ususally not a problem. For this story, it seemed like there was something missing — relationship and character development — and then it was over.

There’s a second story in this volume as well about “sensei” and Mimori. While this story is really cute and I loved the characters, I couldn’t help feeling like something was a bit off. Namely the fact that “sensei” has no given name in this story. Kazuhiko-sensei never names the lead character, just gives his title.

Given what I read in the first story arc and then what happened in the beginning of the second story arc, it seems like Yousuke turning into “sensei” is the most plausible answer. Perhaps Kazuhiko-sensei’s editors didn’t want to upset their readers, and took out Yousuke’s name in the second story arc to keep the illusion that Yousuke and Shindou stay together.

Whatever the case may be, it was still a fun read. I would just really like to know “sensei”‘s name — whether it is Yousuke or not.