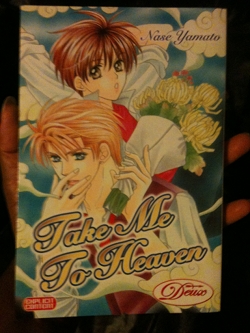 TAKE ME TO HEAVEN by Nase Yamamoto

Basic Premise:
Fumiya lives in house right next to a Buddhist temple and his room is beside the temple graveyard. That’s put him in the prime location to see ghosts and lots of them. The only one who believes him and can help him is his friend Shogo, the temple heir. But, Shogo is more interested in tormenting Fumiya than helping him. Fumiya is at his wit’s end and willing to try anything, including kissing Shogo, if that will make the ghosts go away.

Sex Shown:
Even though this title has a mature rating, it didn’t earn it. There is kissing and exactly two panels (not even pages) of the actual act, which consisted of positioning and no penis shots. I would have rated this book older teen instead and thus charged less. I hate to think the company called it a mature title just so they could charge more.

Review:
Yamati-sensei wrote an interesting one-shot. It defined each of the characters fully, had a great supporting cast that furthered the plot, and there was real emotion.

It’s a quick, uncomplicated read that was really fun.