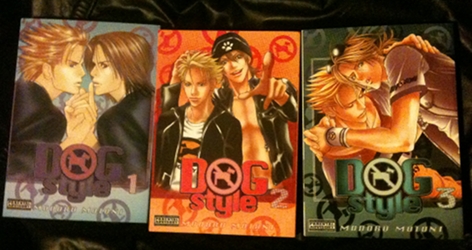 More and more often their times keep overlapping and soon they find solace in each other as they deal with the Kashiwa brothers, bullying, past ghosts, and present problems.

Sex Shown:
Nude bodies. The penis has no real definition. It’s just a shape. Positions are shown but no actual penetration. Lots of kissing. 😛

Review:
I liked Dog Style from volume one. I had a bit of a gap between the first and second volume (didn’t realize volume two was out) and had to go back and re-read the first one but that wasn’t a hardship. The emotional is as big a part of this story as the physical. It was easy to see Chiaki and Miki’s feelings for one another even if they spent a large chunk of the story in denial and/or confused about the object of their affection.

I also loved that Chiaki was the top even though he’s shorter than Miki. They even rib each other about the height difference all through out the books. Chiaki is also the fighter in the couple, giving guys bigger than him nightmares once he’s done with them. Miki constantly refers to himself as Chiaki’s owner and equates Chiaki with a stray dog that he doesn’t want to tame but likes having around.

I would have liked to have learned a little more about Miki and Chiaki’s home lives… their families. Like what their parents think of them coming home beat up all the time and stuff like that. Motoni-sensei only scraps the surface of the past and stuff not having to do directly with the main plot and characters, preferring rather to stick with Chiaki and Miki.

The Kashiwa brothers are too funny and totally oblivious until the last minute. Chiaki’s friends are little additions who bring in funny at just the right times. They could have been fleshed out a little more. Or rather, I wanted them to be fleshed out more.

All-in-all, this is not light reading. The story is emotionally heavy and, I thought, very engaging. I was happy that I got volumes two and three at the same time since volume two sort of leaves off on a… hanging point. Not a cliffhanger, nothing that dramatic. But something you want to see resolved.