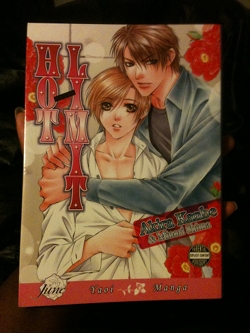 Kazuma Sougou is a reluctant college student who would rather work than attend class. Now he’s paying his own tuition and needs to find a job that can handle the burden. One night bartending he meets Maya — face of an angel and the attitude of a devil. Kazuma can’t believe the mismatch. He also can’t believe that he’s attracted to Maya… another guy!

Deja vu sets in when Kazuma starts his new day job and meets Shinya, Maya’s twin… or is he? Shinya is the perfect student and dutiful son while Maya is the wanton, hedonist no one can resist. Kazuma is determined to find out the secret between day — Shinya — and night — Maya. But his search turns up way more than he bargained for.

Sex Shown:
Allusionary. There are pressed bodies and suggestive positions but no actual penetration or genetalia is shown. I guess the mention of prostitution is how it received a rating of mature rather the graphicness of it.

Review:
I’m a little disappointed in this title. It showed great promise. My biggest problem with it is that it didn’t end. Oh, there was a happily ever after but it came at the expense of the plot.

The story just stops. It built up suspense for a big finish and didn’t deliver, like riding up the hill of a rollercoaster only to have the ride end as soon as you reach the top. In just the same way, this story leaves confusion and a question about the rest of the story in its wake.

Nothing is resolved except the relationship and that is a precarious ending only because the unfinished plot can affect it adversly. The story is cute, the characters are endearing, and if I wasn’t such a plot-driven person, I’d think this was a great manga. But I am, and that lack of an ending ruined it for me.