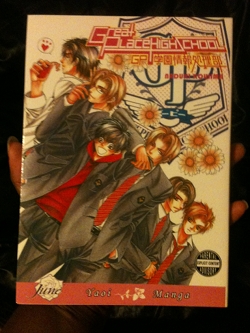 Basic Premise:
High school life… that’s it. The majority of this one shot was done up like the strip panel comics you would see in the margins of a normal manga (the ones I skip over to get back to the main story). They were collected and turned into a tankoubon. There is one tiny story spliced between the panels about Rin Amanohara and Eichi Shidou, president and VP of the student council, respectively.

Though Eichi is VP he’s the one with the power and he’s the one in charge of the relationship since Rin, an orphan, belongs to him… literally. These two nut jobs are pictured on the back cover of the manga one-third of the book, maybe a little more.

Review:
In between the strips, Koujima-san drops an expanded story (in regular manga style) about the Eichi and Rin that are pictured in the background of the front cover, on the back cover and not even mentioned (except as an aside) on the back of the book blurb. I would have liked to know more about Minami and Ryouichi, the two guys featured prominently in the blurb and on the middle of the front cover.

Rin and Eichi’s relationship is… interesting. If Rin ever gets a backbone, the whole thing will explode but for now they make an interesting, yet scary, couple.

I would have also liked to have seen more from the Kotone Kimura and Suzune Kimura, cousins whose mothers are twins and they were born near to the same time. Their relationship seemed like it would make an interesting story as well.

While I’ve loved the other stuff of Naduki Koujima’s that I’ve read (Our Kingdom and Selfish Love), Great Place High School wasn’t one of her better works.