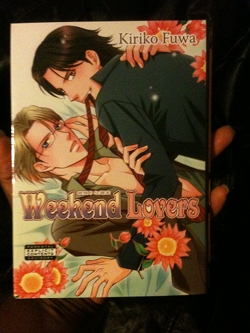 Weekend Lovers
Selfish Weekend
Selfish Weekend Extra
Three stories about Koutarou, age 25, and Asahi, age 32. They are the couple pictured on the cover and the main focus of the book blurb there are other couples featured in this tankoubon. They meet when they both have time off from their respective jobs. While Koutaro tries to do all he can for Asahi, he can’t help feeling jealous, especially when he thinks he has proof of Asahi cheating.

Fragments of Glass and Dark Water
Oikawa wants Yuuji, his co-worker, badly. So badly that his fantasies have taken a sinister turn and he’s having trouble separating daydreams from reality. He’s close to snapping and doing something he might regret to catch Yuuji or is Yuuji the one catching him?

Cage
Miyamoto comes across as a slave driver but Fuyumura knows better. A little blackmail and Miyamoto is as nice as pie, but Fuyumura doesn’t want Miyamoto to be with him just because of a naughty little secret.

Right of Passage, Road to Love
Asahina is a transfer student who’s been roped into helping out the gardening club. Not one to make waves, he goes along with it and finds himself falling for Momota, the club president.

Servant and Service
Miki lost a bet with his boss and now has to wear a female maids outfit while he carries out his work. The clothing makes him the target of his supervisor Kiriya. But Kiriya isn’t jumping on Miki’s case just to be mean.

Review:
The main title segments were cute. Asahi and Koutarou make a cute couple and they are perfect for each other. It’s a feel good type of story I can read over and over. That little hint of jealousy makes it so the story isn’t too sugary and annoying.

I’m not sure what to think of Right of Passage, Road to Love. The story was confusing and I didn’t really see any development of a relationship there. I don’t see one continuing past the ending either. It was the chronicle of a teenage boy’s spur-of-the-moment whim. I can see Asahina and Momota laughing about it later when they meet up in college. Or, shunning each other for life because of it once they’re both thinking clearly.

Fragments of Glass and Dark Water is a WTF?! type of story. It degrades the rest of the segments by being there and doesn’t really fit the mood. I respect Fuwa-san’s right to put the segment into the tankoubon but maybe that should have been the last story, not the second (technically fourth segment). I was ready to put the book down after reading that but decided to see what else was offered.

I’m getting a little annoyed with the one-shots that have multiple story segments that don’t mesh except that the same author wrote all of them. It especially annoys me when it’s obvious that one or two of the stories could have carried the whole book.

Now I know the segments were originally published as segments in a magazine and then were later collected to be published as their own book, but it’s still bites to pick up a book with a great sounding blurb only to find out the blurb story is one-third of the book, if even that much.

Maybe at that point, I should blame the translators and American publishers rather than the author, since the Japanese authors have no say (or little say) in how their books are marketed in the US.