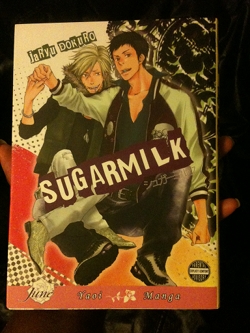 This is a one shot manga with multiple stories…

What’s Your Name?
Yamada Shinta has been dumped again. He’s about to give up on dating when he sees his one and falls in love at first sight… with a man.

Fifteen
Shunsuke and Satoshi are high school boys dealing with love, a relationship and insecurity.

The Lingering Scent of a Rainbow
Furuya-sensei is in love with his student, Yoneguni. But their budding relationship is in trouble when Yoneguni has to transfer to a school that better suits his intellectual needs.

Milk
Sugar
New Year’s Eve
Three story segments following the two guys pictured on the cover for which the manga is named. Sho and Taichi are old high school buddies who meet up after a few years apart. There’s an attraction between them but Sho thinks that’s mostly the alcohol talking. Taichi has to prove himself before he loses Sho forever.

Waiting For Winter
Testuji Nakamura is a photographer who has found his Madonna in Yoichi, a homeless guy he found one day. They’ve been together ever since but change is on the horizon and Tetsuji isn’t sure he’s ready.

Sex Shown:
Hardly any. The book has a lot of kissing and scenes of sweaty bodies, but no penis shots. Matter of fact, there are no invisible penis shots either. This was a very tame Mature title.

Reviews:
What’s Your Name? could have carried the whole book. There was a lot of story to be had in that little segment. As it is, since Dokuro-san didn’t expand on it, the story shouldn’t have even been included. It was an opening and that was it.

Waiting for Winter was the odd man out. That wasn’t a love story like the others but a story about fascination with an art subject. I didn’t feel love with that story, just a sense of awe. It was another one that should have either been expanded or simply left out.

The other story segments, while short, managed to end in a way that leaves the reader assuming there’s a happily ever after involved, especially Sho and Taichi’s story since they had the most face time in the book.

Out of all of them, I think I like Fifteen the best followed by Sho and Taichi’s segments, though that may be because they had a longer story.