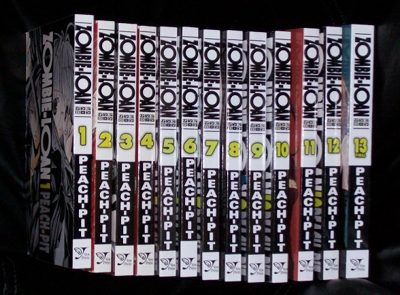 (Note: Picture taken with my Kodak camera of books in my manga library.)

Basic Premise:
Michiru is mousy and pessimistic. There’s nothing significant about her except that she can see when people are going to die. With her shinigami eyes (death eyes) she can see the rings around people’s necks that denote their end is near. Two of her classmates have such a ring. Late night after school, she finds out why.

Chika and Shito are zombies who hunt rogue zombies, and they’ve just saved Michiru’s life. To pay them back and help pay off the loan Chika and Shito garnered to become sentient zombies, Michiru is using her gift to help them hunt and kill more zombies as the newest member of Z-Loan — the zombie loan company.

Review:
This series starts off funny and light with zombie killing and horror/suspense tossed in for ambiance. About half way through the series, the author tosses you into the deep end and things start getting convoluted and confusing. The subplots could be books all their own and the main plot is such that I’m still scratching my head.

That said, this was a fun series. The characters are hilarious and richly dynamic. Just when you think you know someone, the author reveals something new that changes your an entire view of them.

There’s a stunning cast of people that grows throughout the series from book one until thirteen. Of course the later introduced characters aren’t as fleshed out as the earlier characters, but that doesn’t make them any less important.

It’s like Zombieland meets Resident Evil (the first one) meets The Matrix Trilogy. Like I said convoluted. If you think that combo make this series sound interesting, you might want to give this series a try.