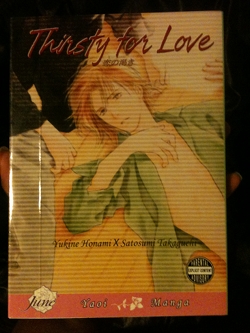 Basic Premise:
Orie is in love with a girl who loves two other men, Suguru and Tatsumi. He’s understandably upset when he finds out, but that’s not the only secret his girlfriend is keeping from him. On the road to discovery, he finds out more about himself than he really wanted to know.

Review:
THIS STORY ROCKED!! It’s much deeper and emotional than most of the one-shot yaoi manga tend to be. It’s the first manga I’ve read where the men are not openly gay. Make no mistake, there is gay sex, however there are extenuating circumstances and it’s not done with the intention of building a relationship. It’s more of an offshoot of the existing relationship between these three guys with one girl.

I didn’t know what to expect when I started and thought for sure the story was falling into the trend of most yaoi manga. You know — boy is dating girl but finds out she’s cheating and he realizes he likes the guy she’s cheating with. That was what I was prepared for and that is totally NOT what I got. The surprises in this story made me love it. Hell, it’s hard not to re-read it while I’m typing this review.

I’ve read a few yaoi manga where Yukine Honami is one of the authors/artists and I’ve yet to be disappointed. Thirtsy for Love is definitely a manga to pick up if you want more depth to your yaoi.