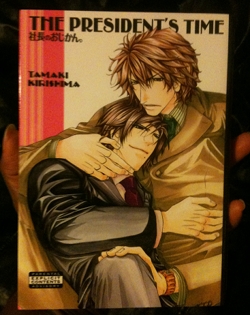 The President’s Time by Tamaki Kirishima

Mitsuki Nagasawa is the acting CEO of Biei Cosmetics. Makoto Torii is a sales rep of Biei Cosmetics. Mitsuki has to become “an evil president” in ten years (and time’s almost up) — his father’s dying wish (and he’s serious) — or else the company will revert to his uncle, who is out for money and doesn’t care who he steps on in the process. Makoto wants Mitsuki and he wants Mitsuki to be good. And thus the delimma of head versus heart versus obligation begins.

Review:
This story was so funny. Cheesy at times but funny. Mitsuki’s idea of evil and what his father probably had in mind are so far removed from each other that you have to laugh — ding-dong ditching, graffitti on posters, crossing on the red. But watching Mitsuki struggle just to do that had me rolling.

Makoto is the all around good guy who doesn’t want to see his loved one going bad. He’s my type of hero and the perfect fit for Mitsuki.

This story was good and I recommend it as a light-hearted yaoi read.