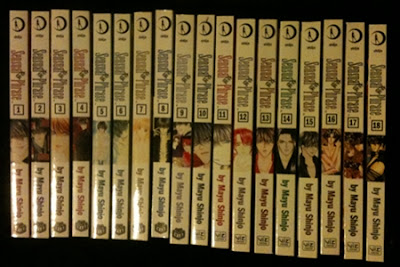 Basic Premise:
Sakuya is the lead singer of Lucifer and he’s fallen for Aine, a typical high school girl. Their relationship is a roller coaster of emotions as Aine learns to deal with having an idol for a boyfriend and Sakuya learns to balance his career with his love life.

Review:
Mayu Shinjo is my kind of writer. The story of Aine and Sakuya is a long one (18 volumes long) and their relationship goes through so much that it’s surprising they made it to the end. I love this series and it is on my re-read list.

But, don’t think that Sensual Phrase is just about Aine and Sakuya, it also covers the relationships of the other band members of Lucifer, giving most of them (not all) a volume in the limelight.

This may be a soap opera-ish look at the world of rock stardom but it’s a fun ride.

Not the typical shoujo story about a high school girl and her dream boyfriend. This story is definitely meant for an older audience.

Warning, this title contains the stuff mentioned in the “sex shown” section above as well as suicide attempts, murder attempts, kidnapping, imprisonment, blackmail, bribery, and a bunch of other stuff that makes this story an attention-getter.