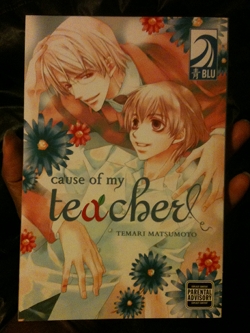 Cause of My Teacher by Temari Matsumoto

Basic Premise:
Compilation of short stories:
– Cause of my Teacher – Torhu loves Minazuki-sensei but is troubled by why sensei always removes his glasses, which Torhu loves on him, when they kiss.
– In The Guidance Room – Kazunari Soma loves Hajime Fukuzawa-sensei but doesn’t think the teacher would give him the time of day. So Kazunari will admire Hajime from afar… or will he?
– Captured By Love – Ijima has been chasing Ishikawa for years and Ijima has finally caught him. 😛
– Whim of Youth – Hiiragi, a top ninja, refuses to be separated from his lover Asagi on this latest assignment which lands him in jail but ultimately proves his love to Asagi.
– Please, Young Master – Kurenai is the ninja protector of the young master and a wannabe lover. The young master challenges Kurenai to a duel where the Kurenai will get the young master’s body if he wins.
– The Boy From the Palace of the Sea – Shiranui is a scholar from the mountains who rescues Izumo and wins an invitation to the coveted sea palace. That’s enough for Shiranui but Izumo wants to give him so much more.

Sex Shown:
Mild bondage, lots of kissing, and sexual positions. There are a few penis shadows but no actual definition.

Review:
My favorite story was In The Guidance Room and The Boy From the Palace of the Sea simply because they were the most fleshed out. The other stories are all nibblets. You’re dropped into the story in the middle and given a little explanation before jumping into the sex scene.

Whim of Youth is a continuation of a story that appears in Shinobu Kokoro. So you have to read that to get the start of their story.

Each one of the stories could have easily been fleshed out into a full volume of its own. They are cute, short stories that are quick reads for a nice thrill.