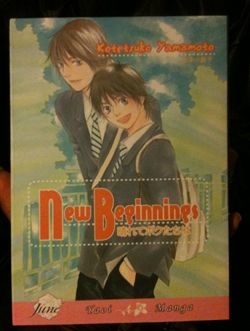 Basic Premise:
Childhood friends Chihiro and Keigo are reunited in high school after being separated since elementary school. As a guest of Chihiro’s family until graduation, Keigo can’t help but admit to his feelings for Chihiro. Creeped out and a little annoyed, Chihiro sets out to find love — female love — for Keigo in hopes of getting the man’s mind off of him.

Sex Shown:
*snort* This is an OT title. All you get is kissing and hand-holding.

Review:
Thank the manga gods — a one shot that contains only ONE STORY throughout. Yup, this title only has one story and within that story there is only ONE couple to follow. The story takes up the entire one shot so you don’t have to get all enamored of one couple just to leave them behind for another couple in a few pages.

But that aside, this story was utterly cute. I say that without a bit of sarcasm. “Cute” is the only word I can use to describe it. If you are looking for a feel good boy-love, then this is the title for you. I just wanted to hug Chihiro and Keigo both… maybe even at the same time. They are the cutest boy-love couple I’ve seen yet and I’ve read a lot.

I wish there was a sequel because I want to see what other mischief Chihiro and Keigo will get into with each other.