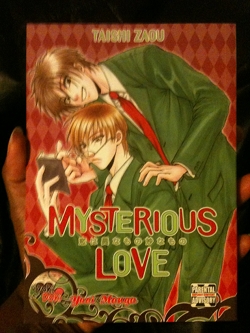 Basic Premise:
Masafumi Tamura is an average, high school heterosexual male. He’ll tell anyone who will listen and even prove it if needs be. His need to reaffirm this fact stems from his recurring dream of having sex with man… and enjoying it. Masafumi is sure this will never come to pass until he meets Narumi Seiwa, the man in his dreams. Masafumi is determined not to give in to what everyone around him says is fate, but he may not have much choice in the matter.

Review:
Taishi-sensei is one of my favorites. This book only reaffirmed that fact. It was hilarious the way Masafumi was trying so hard not give in to the inevitable. Usually it’s the straight guy having to be “coerced” into being gay. In this story, it’s sort of the opposite. Everyone around Masafumi is ready for him to accept his homosexuality, except him. His family is supportive, his friends cheer him on, even the supposed object of his interest is game. The hilarity comes of watching Masafumi fight it so hard.

This is a cute, quick read that I will revisit time and again. I only wish Taishi-sensei hadn’t run up against her deadline with this one (as stated in her author’s note). She could have explored the relationship a little more. I would even like to see a sequel since Narumi and Masafumi are so cute together.