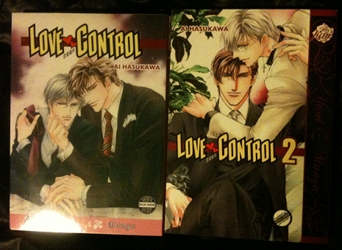 Basic Premise:
A one-shot with two with two stories. First two-thirds is about Takashi Okumaru and Kei Yamashiro. Kei is hired by Takashi’s company to do a new interior design for one of his company’s restaurants. Takashi finds Kei attractive and wants him but Kei thinks Takashi is just playing and is determined not to lose the game. The second story is about Shiro Seno and Yuu Koubara. As a prank Yuu sent out a provocative invitation to a corporate building not thinking anyone would answer, but Shiro does and instantly feels a connection with the sad, lonely boy. He just has to convince Yuu that they have more in common than they think.

Sex Shown:
True to DMP’s standards, there’s allusion and one teaser scene or two but no shots of actual intercourse.

Review:
I like both stories and wish this wasn’t a one-shot simply because the second story isn’t finished. The author left off with a prologue and that’s just mean. 🙂

It’s a good manga though. The relationship between Takashi and Kei is too cute and you can’t help feeling sorry for them while rooting for them.