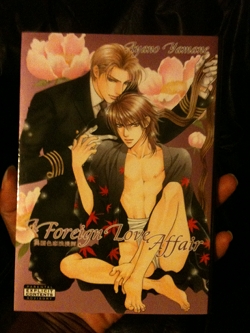 Basic Premise:
There are two stories contained within this manga. The first two-thirds of the book is about Ranmauru Ohmi and Al Valentino. Ranmaru is the underboss of the Ohmi clan and has just married the daughter of another clan to keep her safe since her father recently died. Well the newlweds couldn’t be more displeased with each other. While on a cruise to Italy, Ranmaru — who insists on wearing a traditional Japanese kimono at all times — meets Al and the seduction begins. The last third of the book is about Hirotaka Takaoka and Tohru Serizawa. Hirotaka is in need of a wife and Tohru is the matchmaker he hires to help him, except Hirotaka starts falling for the matchmaker instead.

Sex Shown:
There is penetration shown, however there is a definite lack of detailing so it’s not as risqué as some titles. IE – the penis shots are missing a penis. It’s mostly vague outlines or not drawn at all while you know it’s there since the other guy is licking it. ;P

Review:
I liked both stories. I think the first story with Ranmaru and Al could have been fleshed out much more, but the story presented was good. Hirotaka and Tohru are so cute together. Their story could go on but it doesn’t have to.

This is one of the better ones that I’ve read in a long time. I’ll definitely find more by this author.