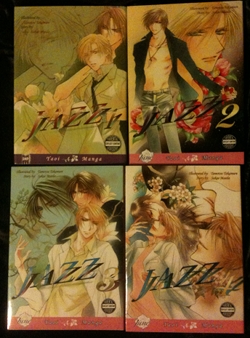 Basic Premise:
Koichi Narusawa is a doctor. Naoki Segawa is his patient. From the first treatment, Naoki wants Koichi and decides to take him. Koichi is swept up in the storm of Naoki’s love. A love so strong not even transferring to America can stop Naoki from acting upon it. Both are insecure and yet both want love so badly. They have so many differences to overcome or else they can never be together.

Review:
If anyone ever asked me what my favorite yaoi/BL manga was, I would answer without hesitation and with enthusiasm — JAZZ.

I LOVE this manga. I can read it over and over and never get tired of it. I almost fell into reading it again while writing this review (read it a long time ago but finally getting around to writing the review now).

You have to empathize with Koichi. He lost both of his parents and, even when he had them, they weren’t much of a family. He doesn’t really know how to love or what love feels like. He shows everyone a serene, smiling face that makes everyone think he likes them when he’s actually ambivalent.

Naoki is passionate about everything. It’s all or nothing with him. He’s the only child of a rich family with an overprotective mother and a somewhat negligent father. He knows what he wants and he’s used to getting it the way he wants no matter who stands in his way.

These two personalities meet up and fireworks isn’t the word for it. They are an explosion of nuclear levels. Their emotions become the readers emotions. You can feel their anguish and despair. You’ll get angry with Koichi, you’ll rage at Naoki (a lot), and then you’ll love them both all over again.