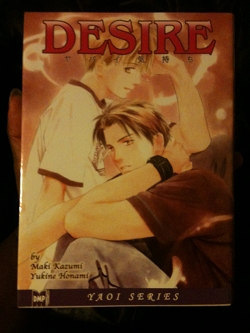 Basic Premise:
Toru Maiki has a crush on one of his best friends Ryoji Nakajo. So it comes as a huge shock when Ryoji confesses to being turned on by the thinking about Toru. As jokes go, it’s a cruel one and Toru isn’t amused. Ryoji is serious and he wants to see if it’s a fluke or if there is something more to it. The way he wants to see is having sex with Toru. One part of Toru is ecstatic at the idea. The other part is deeply depressed at a physical relationship with no emotion involved. It’s up to Toru to decide what’s more important — lust or love.

Review:
This was one of the first yaoi/BL manga I ever read. (I’ll do a review for the first at a later time). I was still fairly new to the genre (in manga format) so I wasn’t sure what to think of it.

Now that I’m a veteran yaoi/BL manga connoisseur and I’ve re-read it, I can offer up an opinion.

Toru and Ryoji are cute together. The way they both struggle to pretend it’s just experimentation when it is so much more is endearing. Ryoji comes off as just playing around but his actions betray how serious he is about Toru.

I’m sure I am partial to it because it was one of my firsts, however this title will remain forever in my re-read pile. I never get tired of seeing Toru and Ryoji “finding” one another. My only regret was that it wasn’t longer.