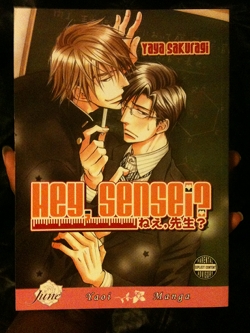 Basic Premise:
One Shot – Hey Sensei!? (title story)
Takashi Homura is in love with Isa-sensei, his high school math teacher. For Isa-sensei there are just too many obstacles besides the student-teacher impropriety to surmount — the ten-year age gap, for instance. Can Takashi get Isa-sensei to forget all of that in the name of love?

Side Story – Unbreakable Bones
Yuji and Manabu are childhood friends. In the past Yuji protected Manabu. In the present, Yuji is a ramen delivery boy who used to be a delinquent and Manabu is a cop. It’s an odd couple but can they make it work?

Sex Shown:
For Both – Bodies are in sexual positions, doing sexual actions, and there are allusions to anatomy but no real detail.

Even though both characters admit to feeling strongly for each other, it seemed like they are both just marking time until one of them sees something shiny and leaves. Not a couple I could find myself attached to. As well, there were a few things left dangling like Takashi’s sister and what she would think of all of this.

Unbreakable Bones
I liked Manabu and Yuji. I almost feel like they should have been the main story OR be given their own one shot so the full story could be explored. There was a lot of depth for a story that only took one chapter.

On a side note, I thought the puppy in this story was incredibly cute. Yuji looked that much manlier carrying it. 😀