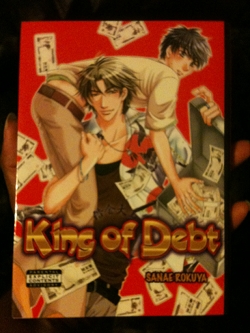 King of Debt by Sanae Rokuya

Basic Premise:
One shot, multiple stories
King of Debt (title story)
Souta Saiki is always lending money to his friend Taketora. He’s on the verge of cutting him off unless Taketora can convince him otherwise.

Rush
Shinpachi Nakamura wants to be the best boxer there is. He just has to get past Tsugihiro Fujieda’s training of his body first.

My Dear, My Bear
Minori’s brother abandoned him a year ago with nothing but a note a small stuffed bear. Minori is making due until his bear becomes a real man willing to take care of him.

Call My Name
Yanase confessed to Natsume back in high school and got rejected. A few years later they are reunited but has Natsume had a change of heart or developed a cruel streak?

Extra Manga
One last visit with each of the couples.

Sex Shown:
The drawings aren’t detailed but the sex is graphic. There are silhouettes penetrating silhouettes.

Review:
Each story was really short so writing a review for each seems a little troublesome. They were all good. My favorite couple was Minori and Bear followed by Natsuki and Ryuuji.

I love that Rokuya-sensei never actually gave “Bear” a name. It was too cute that Minori kept calling him Bear. It was also kind of funny that he just accepted the fact that his stuffed teddy bear turned into a real man.

Natsuki and Ryuuji end off with a strange conundrum — which is the uke and which is the seme? As well as, how old is Ryuuji really? Those two questions kept the story intriguing for and make me want to read it again and again just to see if I’ll get a hidden clue as to the answer of both.