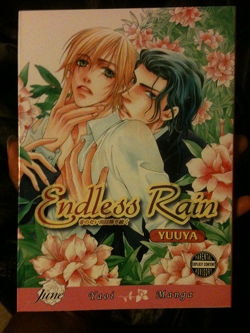 Basic Premise:
Akira and Nao have just lost their mother to cancer. Their estranged father has sent his top man Hyouma to retrieve them so they can become his heirs, because his first heir is on his death bed. Akira is reluctant because he’s the son of a mistress and the family looks down on him. However, Hyouma seduces Akira into joining forces on their mutual request for revenge against Akira’s father.

Review:
It’s a good story and not as predictable as I originally thought it would be. I’ve grown a little tired of the rape-them-until-they-like-it scenarios that seem to be a staple of most yaoi story lines. And make no mistake, this is rape, not forced pleasure as Akira doesn’t want it and then is laid up with a fever for a few days afterward while he heals.

Just when I thought Akira would be like all the rest of the doormats that show up in these plots, he grew a backbone and started thinking for himself. I liked that. And Hyouma isn’t as bad as he seems in the beginning of the story.

The characterizations are solid and endearing. The sex is what you’d expect from a DMP translated title (suggestive but no actual money shots). It’s a good one-shot that doesn’t need any expansion.