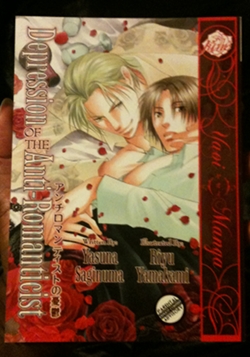 Basic Premise:
DEPRESSION OF THE ANTI-ROMANTICIST
Minoru (aka Minami) is a crossdresser a gay hostess bar. He’s straight but he’s willing to play the part so he can pay off the loans his parents left when they died and so he can take care of his younger brother and sister. Enter Kan Shiroyama, a mysterious guy who wants to make Minoru his new boyfriend… if Kan can convince him.

READ BETWEEN THE LINES
Ichigaya has weird tastes. Shunichi has just learned to put up with it. When Ichigaya professes his love, Shunichi thinks it’s a joke at his expense. Shunichi is about to find out how wrong he is.

BORDERLINE LOVER
Hasabe is an honor roll student with an apathetic attitude. Daisuke just caught Hasabe doing compensated dating. The only problem is Hasabe doesn’t seem to care… about anything. Daisuke decides to make Hasabe care and ends up falling for him in the process, but does Hasabe feel the same.

Review:
Depression of the Anti-Romanticist had great potential. HAD. The start of the story is rushed and the end never comes. I read this book before and then re-read it so I could write this review. I knew I read it before, but couldn’t figure out why I didn’t remember much about it. Now I know. It doesn’t end.

When I say it doesn’t end, I don’t mean the story could have gone longer and I want to read more. I mean the story hit the climax and then stopped. No resolution. No happily ever after. The main characters have a huge argument and then STOP.

I looked around the internet, thinking there might be a second volume, but I couldn’t find anything. I hope there is a second volume and just know one knows about it yet. Considering this book was first published in Japan back in 2008, I think I’m SOL. I’ll never learn about Kan’s past or if he and Minoru end up together.

But enough lamenting about the lack of ending. Let’s talk about what was there. Minoru and Kan seemed like a fun but emotional couple. Kan is volatile and always on the defensive. Minoru is just plain nosy. I can tell he wants to make sure the people around his younger siblings are safe, but he takes it too far and then gets mad when Kan calls him on it.

The law of manga says they’ll end up together, but since the story didn’t end, I’ll never know for sure.

Read Between the Lines is PURE Riyu Yamakami. I love Riyu-sensei’s works. A couple who starts off with a misunderstanding (usually because one of them has communication issues) and a happy ending when it’s all resolved. Fun story.

Borderline Lover
Another Riyu-sensei goody. You have to feel sorry for Daisuke in this story. The poor guy is going to go through hell before he gets anything conclusive out of Hasabe. But on the othe hand, Hasabe has shown how much he cares in his own way. They are going to be a rough couple with lots of arguing before things smooth out.

The last two stories don’t make up for the total lack of ending in the first, but I did enjoy reading more of Riyu-sensei’s work.