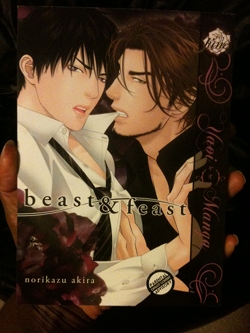 Basic Premise:
Kazuha Hishunuma is a police detective. Itsuki Hyodo is a yakuza underboss. Former middle school buddies reunited after a few years apart, Hyodo is ready to start a relationship with Kazuha. A murder investigation, Hyodo’s eventual succession to the head of the family and over eager minions keep getting in the way. All the obstacles make Kazuha think the relationship will never work, but Hyodo isn’t prepared to let him go.

Review:
This manga was aptly named. Hyodo is a complete beast, wanting sex anywhere and everywhere and at anytime. But that’s what makes him such a loveable character. He’s got a one-track mind that’s always headed towards Kazuha, his feast, sometimes an unwilling feast.

They are such an odd couple. Kazuha is the reserved, conservative cop. Hyodo is the typical flashy, boisterous Yakuza. Plenty of people don’t want them together, they know they shouldn’t be together, but that just makes their relationship so much more fun.

This is a total re-read, keeper shelf manga for me. There’s laughs and love and intrigue as Kazuha tries to solve a crime and Hyodo tries to stay alive to inherit his rightful place.

Fans of the caring tough guy types will love Hyodo. It’s funny to see him portrayed as a lion in bed and puppy when Kazuha is scolding him. This is a manga not to be missed and Norikazu-sensei is now added to my must read manga artist list.