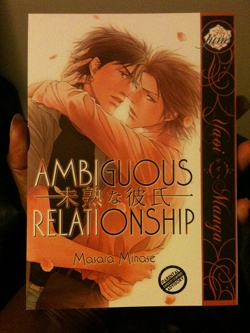 Basic Premise:
AMBIGUOUS RELATIONSHIP & HOLD ONTO ME
Satoru took Reiji in out of pity. He never expected Reiji to seduce him and turn his life upside down by moving in. Reiji’s family isn’t happy about the new arrangement, leaving Satoru to decide if their relationship is worth Reiji’s future.

TRADE-OFF
Kazaoka is the personal assistant to the president of his company as well as the president’s lover. When the president dies and leaves his son in charge, Kazoka is a little surprised to find his job description hasn’t changed… or has it?

MAN ON!
Nagumo never expected to see Ohno, a star soccer player, at his school. It has a crappy team and Ohno was offered better. When Ohno confesses to choosing the school so he could be closer to Nagumo, his first love, Nagumo isn’t the least bit happy and shows it. But Ohno isn’t about to give up on love that easily.

MORE THAN A CHILD, NOT QUITE AN ADULT
Dr. Waka has a problem patient — Kotaro. He’s a grown man but refuses to stop seeing his favorite pediatrician. Dr. Waka tries to put his foot down, but Kotaro just decides to make a house call instead.

SWEET RESTRAINT
Atsushi has been sold to pay off his father’s company’s debts. When he finds out, Atsushi is pissed. Not about being sold but the person who bought him. Fukami was supposed to be his friend, but these new circumstances reveal Fukami always had ulterior motives.

MIRACLES DON’T HAPPEN & INEXPERIENCED LOVE
Ando leaves Ohsuga money every time they have sex, and Ando is sick of being bought. It’s time to bring an end to their relationship. Ohsuga just wished it didn’t hurt so much to do it.

Review:
I love Minase-sensei. This manga is no exception. Of the stories presented, my favorite was the title story, though Ando and Ohsuga’s story brings up a close second. And that’s not just because they were the longest stories in the manga

This manga is pure Minase-sensei with misunderstandings and misinterpreted deeds galore. Watching the couples get over those two humps to make their relationship work is always fun and Minsae-sensei does it well.

All the stories left off at a satisfying point. Sure I want more from each, but it’s not a nagging feeling that the story isn’t finished. It’s more simple curiosity. For the fans of Minase-sensei this is a must read. For those new to her, this is great manga to introduce you to her style.