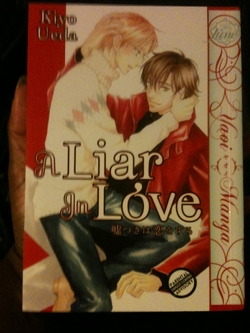 A Liar in Love by Kiyo Ueda

Basic Premise
“A single phone from my little brother started it all.” Hiroki is a playboy who has played the field so much he knows all the moves to get any man he wants and his little brother has put Yasuyuki Miura on Hiroki’s radar. Things start getting complicated when Hiroki realizes Yasuyuki is more than another conquest.

Review
This story was so sweet. Not in a bad way. It was emotional and draws you into the characters without you even realizing. You start off in Hiroki’s POV and you just know he’s up to know good. He’s all about pleasure and which man will give it to him next. He loves the hunt and knows the game like he has cheat codes. You can’t help but feel sorry for Yasuyuki because there’s no way this can end well for him.

But Yasuyuki’s giving and kind nature get past Hiroki’s tough playboy exterior to his heart. That’s when the real drama begins. Hiroki’s struggle to hold onto his old self while embracing the new man he is with Yasuyuki is what made this story so sweet. A definite re-read for the keeper shelf. I will be looking for more of Ueda-sensei’s work.