Let’s talk about the experience leading up to the movie, shall we? And sorry ahead of time for the graininess of the pictures. My iPhone camera isn’t that great and my normal camera just sucks. But hey, some pics is better than no pics.

20 April
I get an alert on FB that Sharkey Theater on Pearl Harbor is having a free showing of Battleship for the first 450 in line at 4PM on 28 April for a 6PM showing. Hell yeah I’m going! I planned to see the movie anyway. I’m all about seeing it for free.

28 April
12:40PM
I head out to Starbucks to get in-line sustenance.

1:00PM
I get to the theater and get in line. There are about twelve people ahead of me. This is a good thing in my mind. The theater has a 400 person limit (dropped from 450 the day of) and I’m near the front. No worries on my end.

1:20PM
Nadja, the FB friend who told me about the event and Hawaii-outing buddy, shows up and we spend the time chit-chatting about writing and movies and whatever else comes to mind.

2:30PM
The line starts getting long. About this time I’m not sure how long, but some other people around me are saying that it’s curved around the building. Yup, I’m real happy I got there early.

3:45PM
More and more people are arriving now and looking for spots, looking for ticketing details, and marveling at the length of the line. At this point I checked it out to see how it looked. Wow is all I could say before I went back to my spot and truly appreciated my resolve to get there early. 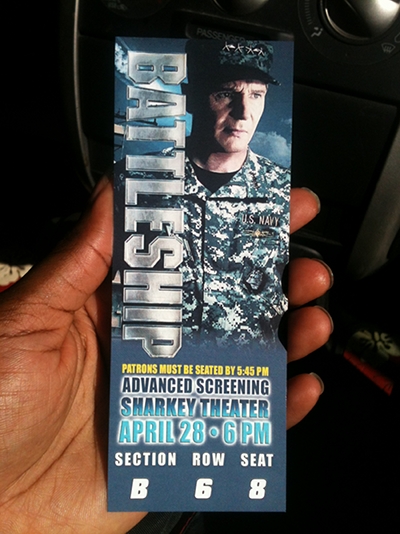 And then I head back to my car. There’s no place I want to go, the movie starts in less than two hours, and I didn’t want to have to find a parking spot again since I was in a prime space. So I stayed my butt put. On the way back to the car, I took a few pics of the line.

This above is the first bend of the building once you leave the ticket booth. Below is the line as it keeps going down the length of the building and the ones next to it and broken up by the crosswalk so they don’t block the street. Click the pics to see bigger versions.

4:50PM
I head back to the theater since seating is supposed to start at 5PM. People are still in line getting tickets, or hoping to get tickets. I met up with Nadja. That’s her below. 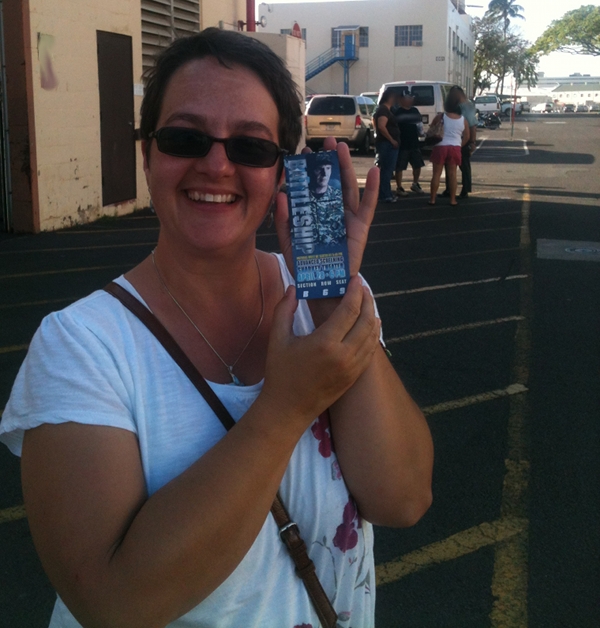 I took a picture of the back of her ticket since I forgot to take the back of mine and was too lazy at this point to pull it out of my purse. Besides, it was better to let her hold it while I took the picture. I would also like to note at this time that there were different pictures on the front of the tickets — Liam Neeson was on mine. Alexander Skarsgard was on another and Rihanna was on another.

We hung out to wait for the seating to start. When the theater people came down the line and announced the event was “sold out,” there was some grumbling from those still in line, of course. One woman said, “I wish they had told us that a while ago instead of making us wait an hour and a half in line.” Uh, lady, I was in line for four hours. You get no sympathy.

5:10PM
Anywho, tickets were checked (and we were allowed to keep them. Score!) and free popcorn and drinks were offered before Nadja and I made our way to the seats. Which, by the way, were assigned seats. I appreciate that. No mad rush to get the “best” seat or shuffling people around so everyone can sit together. Very orderly.

6:20PM
The event was supposed to start at six but we got a late start because Peter Berg was stuck in traffic or something. Why yes, I did say Peter Berg the director of Battleship stopped by to talk to us a little before the show. 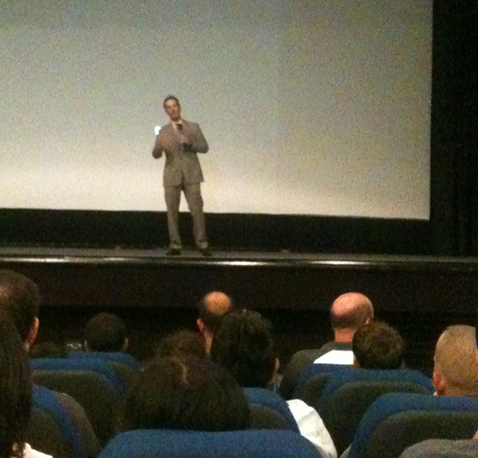 And he brought some friends with him. Like Rihanna and Taylor Kitsch 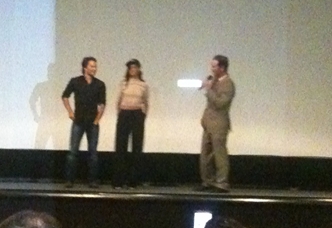 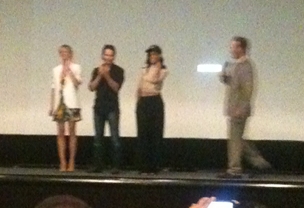 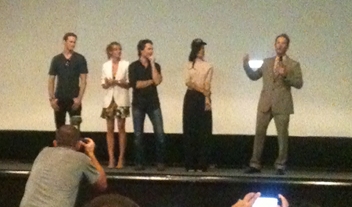 As well as Gregory D. Gadson (off in the way left coming on stage)

Oh yeah, you know you’re jealous. I was six rows away from Alexander Skarsgard. 😛 Sure I have a crappy camera but his and the appearance of the other actors made the four hour wait in line TOTALLY worth it. The theater people and promo for this event didn’t even HINT that the cast might be on location for this. One lady in line said that her husband had told her Rihanna was on island and had visited his boat that day, thus she might be at the showing. I’m sure if the theater had broadcasted the cast being there the line would have been around the block and few times by the time I got there. 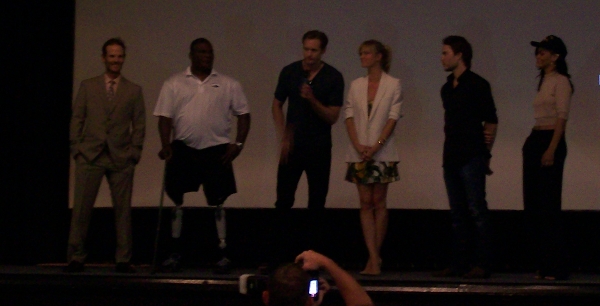 This is Alexander Skargard telling a joke about his rank in the film and how he made it because he was a Petty Officer at age 3… oh and he’s just that much better than the other officers in the room. Everyone got a chuckle out of that. 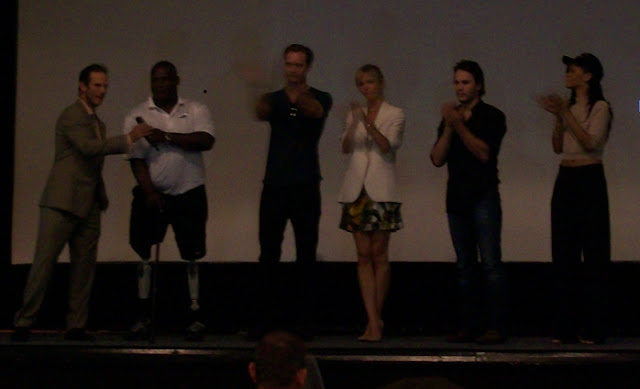 Another cast pic after Gregory D. Gadson is finished speaking.

6:40ishPM
Roll film. To see what I thought about that, read the review.

9:00PM
I got home, fed the cats and myself and then wrote this and the movie review. Fun time had by all.