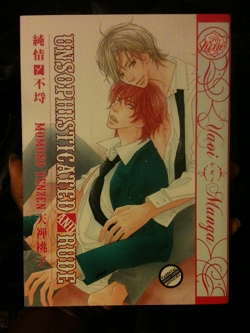 Unsophisticated and Rude by Momoko Tenzen

Basic Premise:
One-shot manga with multiple stories:
– Unsophisticated and Rude (title story) – When Hiroto’s best friend Satoshi confesses to liking Nao (their sempai), Hiroto is floored… only because he likes Nao too.
– Pretender – Manaka loves Katase and tells him so. Katase isn’t put off but he is hesitant. Manaka suggests they pretend-date for a week. If it works out then they can stay together. If not, then Manaka will never talk about his love again.
– Midori Vivid In My Eyes – Takamiya has just met Sonoda, the weirdest man he’ll probably ever meet. But, it’s Sonoda’s weird outlook on life that endears him to Takamiya.
– Second Love – Haruno has just met Uenaga… again. They knew each other in elementary school but Haruno can’t remember Uenaga despite everyone telling him that they used to be very close. There’s something important about their past together and Haruno needs to know what that is before there can be a future.
– I Want to Be Your Number One – Tomo has always loved Yukihiro, since they were children, in fact and Tomo has told Yukihiro this everyday without fail. Yukihiro feels that Tomo’s words are just echoes of their childhood so it hurts him to hear them because he really loves Tomo and thinks confessing could ruin their friendship.

Review:
OMG! I didn’t even realize this was Momoko-sensei again until I started writing this review. I just happened to pick two manga at random to read on two totally separate days (few weeks apart actually). I don’t normally pay attention to authors since I pretty much buy whatever DMP puts out. That’s just funny to me that I would pick up two books by the same author and not even realize. Huh.

Okay, on to the review.

Momoko-sensei is fond of lack-of-communication, it seems, but that works in her stories and reveals a lot about her characters while they try to get at the truth.

My favorite story was Second Love. Haruno is so desperate to remember Uenaga and even admits that he doesn’t remember him, which is something most people wouldn’t do when faced with someone they were supposed to be really close with. Most would play it off (and Momoko-sensei even mentions that in the manga) but Haruno is up-front even if that hurts Uenaga’s feelings. It was awkward and funny and that’s what made Haruno and Uenaga my favorites.

Midori Vivid in My Eyes is definitely a close second. Takamiya doesn’t even realize he’s falling in love with Sonoda until he’s too far gone to actually turn back. Watching him come to terms with his feelings was a treat that I love to re-read.

Surprisingly enough, my least favorite story was the title story, Unsophisticated and Rude. It should have been called “Underhanded and Backstabbing”. If this story had had a second chapter, Momoko-sensei could have had some sort of closure (can’t go into too much detail without spoilers, though my title suggestion is somewhat of a spoiler) but it didn’t. As it stands, I’m not too fond of Nao or Hiroto. I’m glad that I didn’t stop reading after that story. I was tempted, don’t get me wrong, but I kept going in the hopes that it would get better… and it did.

I like Momoko-sensei’s style. This is a fun manga, even with the addition of the title story. If you like misunderstandings born from lack of communication and boys stumbling through the beginnings of an unknown relationship with other boys, then this is the manga for you.