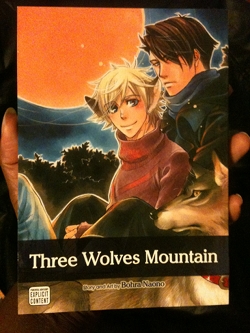 Basic Premise:
Jiro and Tarou are werewolves who have been kicked out of their pack and made to fend on their own. Susugi is a cafe owner as well as the guardian of the nearby cemetary. He takes in Jiro and Tarou on a whim, but doesn’t expect Jiro to develop feelings for him.

Review:
I absolutely ADORE Naono-sensei. Love love love love everything I’ve read by her. Her characters are always tortured and caring and tug at the heart strings. But also they are hilariously shy. Three Wolves Mountain is no exception. Any fan of Naono-sensei will love this manga. Anyone who isn’t a fan should read it and thus become hooked on her work.

Susugi and Jiro are too cute. Both when Jiro is younger and when he gets older and the relationship reverses. Naono-sensei is known for her older men being on the receiving end.

Jiro and Tarou’s parents are comedic gold as well. Even Aki is a riot. This manga will forever and always be on my keeper shelf high amongst my re-reads.