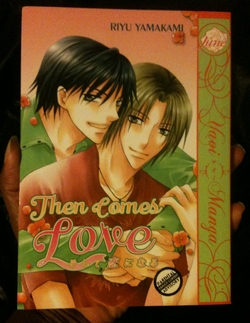 Then Comes Love by Riyu Yamakami

Basic Premise:
Midori Hirano is in love with his best friend Takahiro Sasahara. They are polar opposites. Midori is aloof and quiet while Takahiro is boisterous and popular. Midori doesn’t know why he loves Takahiro, but he does know not having his feelings returned hurts. Midori wants to distance himself from Takahiro without losing their friendship, but Takahiro isn’t about to let that happen.

Review:
Riyu-sensei has joined my list of must read manga artists. Her books never fail to entertain me. This one is no exception to that.

Takahiro is the big loveable idiot who just doesn’t get it. He wants Midori all to himself but doesn’t realize why he feels that way. Midori wants more than friendship but is scared to confess his feelings because he thinks Takahiro will shun him. It’s a conundrum that plays out so well in this story.

Any fan of stories featuring first love and love with a difficult partner will really enjoy this book and Riyu-sensei’s other works.