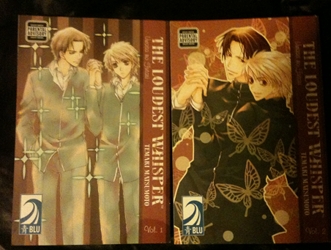 The Loudest Whisper by Temari Matsumoto

Basic Premise:
THE LOUDEST WHISPER
Hiroshi Akabane is the vice president of the student council. Seichi Aoyama is the president. They are best friends but every thinks their closeness is something more. When Aoyama decides to test out “dating” Akabane to see if the people spreading rumors might actually be seeing something they aren’t, Akabane is surprised to find out the results.

CURE FOR THE COMMON CRUSH
Takimoto is a pharmacist who accidentally gave his customer Sawano an aphrodisiac instead of medicine. Of course Takimoto feels responsible and insists on helping Sawano out.

FIRST STROLL / FIRST HELP
Narumi is the young master of his very large and posh home. Sakurai is the head of his security. Narumi wants to be of help to Sakurai but that’s hard to do when he’s being watched every second of every day and can’t even go shopping for a birthday present for Sakurai by himself. But Narumi has a plan to remedy that.

SELFISH RECIPE
The prince refuses to eat. He only wants to drink alcohol. Most everyone indulges this whim, but one chef isn’t pleased with this diet. Yuu demands to know why the prince won’t eat. His forcefulness catches the prince’s eye, but it might be too late to catch Yuu.

Review:
This manga is the continuation of THE RUMORED PAIR, the last story that appears in Just My Luck. I asked that the story go on without realizing I already owned it. 😛

The main couple Akabane and Aoyama made me laugh. Aoyama is hard to read because he is so stoic and no one knows what’s he thinking. And when he finally opens his mouth, his thoughts are so off the wall that you can only stare at him and shake your head. Poor Akabane is just swept up with Aoyama’s flow, but you can tell they’ll get along great in the future.

Shuntaro and Hideki needed a longer story. Their story was very sweet and innocent, especially compared to the others. It’s a very simple story that I really enjoyed.

Narumi and Sakurai… I can see this going badly for Narumi’s future. No one person should be pampered that much. He’s going to need people taking care of him for the rest of his life.

And the last story… sorry but that prince would have just starved. Again another spoiled person though he’s not as sweet as Narumi. When the prince finally gets his head out of his butt, he’s a little more tolerable.

Out of all the stories, the main one was my favorite. I wish Matsumoto-sensei had done something more with Aoyama’s dad. He was too funny.