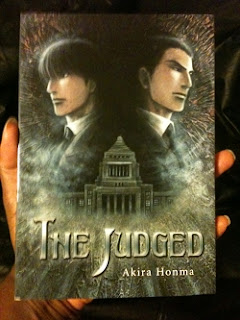 The Judged by Akira Honma

Basic Premise
THE JUDGED
Kyou Sugiura has been reacquainted with the one man he hoped to never meet again — Tatsuki Toudou. And they’ve met in the worst possible way. Kyou is investigating Tatsuki for criminal activity. They have a turbulent past filled with shared pain and joy. Kyou has to make sure it doesn’t cloud his judgment or ruin his career.

THE JUDGED ~ A VIEW OF YOU
Kyou is still struggling to find a balance between his job and Tatsuki, who won’t take no for an answer. The investigation can’t be ignored and Kyou refuses to compromise his ethics to be with the one he loves.

THE JUDGED ~ SPRING HAZE
Detective Shinoda wants answers to close his case and the only man who has those answers is a man Shinoda calls Hachiko, the former secretary to Tatsuki Toudou. Shinoda is putting his career on the line to solve a case many people in high places want closed. But Shinoda is starting to see it’s not his detective instinct that keeps him coming back to Hachiko.

LIKE A WHITE PHANTOM
Doctor Matsuda is a playboy who likes nurses. Doctor Suzaki is a stoic man who appears obsessed with his job. Suzaki’s very presence enrages and arouses Matsuda. When certain secrets come to light about Suzaki, Matsuda finds himself falling even deeper in love.

WHITHER THE PHANTOM GOES
Matsuda and Suzaki now run a general clinic together but that doesn’t mean all is well with their relationship.

Review
This is not a manga to be approached lightly In fact, if you’re like me, you might have to take it in chunks spread out over a few days. I enjoyed this story but it is rough… for lack of a better word. There’s some cute jokes at the end, but that’s at the end. Until the end, you have to deal with the gritty relationships presented and know that these men will reach happiness only after a hard fought, bloody battle.

I felt sad for Kyou but I also wanted to smack him. To ignore the threats and near violence to his sister, even on her say so, to be with Tatsuki is a little hard to swallow. I don’t think I could be that forgiving. I know family reunions would be more than a little strained.

Hachiko’s story is sad to the point of tears and Suzaki’s plight is no picnic either. The men of this book have some severe emotional baggage that made this story both griping and emotional. Those who like their manga on the rough side with a heavy plot will enjoy this. This is Honma-sensei’s first work and I have read others. I plan to find more.