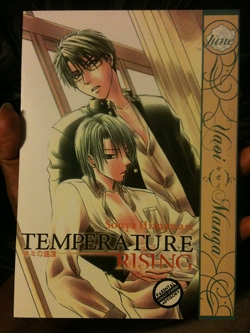 Basic Premise:
Minori Otonari is in love with Mizumo Hiraga, but Minori can’t confess his feelings without ruining their current relationship. Minori pays Mizumo for sex. Mizumo won’t take hands out and Minori doesn’t want Mizumo sleeping with other men, so they came to this arrangement. But this emotionless exchange isn’t all Minori wants. Quite possibly, it’s not all Mizumo wants either.

Mizumo is all about money so he can help his family get by without hand outs. He found the easiest way to make a lot of cash and decided his body was a small sacrifice to make sure his brothers don’t starve. Minori is giving up his tiny paycheck to make sure Mizumo only comes to him for sex.

But don’t let that heavy plot fool you. This manga is full of humorous moments that keep the whole thing light and entertaining. There’s one scene when Minori gives his little sister an “instant perm” while she’s trying to do her homework that had me laughing out loud.

This is a great little pass the time manga. It depends heavily on flashbacks to tell the back story. That’s is a little annoying, but the black border makes it obvious when one is happening.