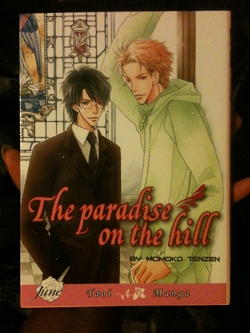 The Paradise on the Hill by Momoko Tenzen

Basic Premise:
This is a multi-story one-shot.

The Paradise on the Hill and Date are about Kijima and Ono two male teachers at an all-girl’s school atop a hill. Ono has a crush on Kijima but is unsure how to approach the other man without ruining their friendship and straining their working relationship.

Summer Rain follows Motomi Takase and his rendezvous with a lover he left and hasn’t seen in ten years. He received a letter after years of nothing and doesn’t know what to expect but his lingering love won’t let him ignore it.

Sex Shown:
As a OT/YA title, there isn’t more than kissing in this volume.

Motomi’s story is equal parts sad and happy. I wish there was more to it. It could have been a one-shot all its own. On the other hand, it’s probably good the story stopped where it did. Expanding on it too much might have made me mad at one or both of the characters.

Overall, this volume was great and it’s one of my re-reads.