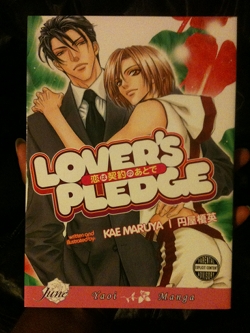 Three separate couples have to overcome their differences and make their relationships work. Haruna Kazuto wakes up with a nasty hangover to find out that Akihiko Takasugi has bought his company for an entire month. Haruna isn’t one to back out of deal but he didn’t plan on his heart being part of the package. Mitsuki Yuasa and Gaku Togo have been childhood friends and neighbors for years. In the past, Mitsuki would always be the one to comfort Gaku with his “good luck charm”. Something has changed over the years and the “good luck charm” has changed too, but Mitsuki’s not sure if Gaku has felt that change. And then, there’s Fumiya and Eiji Sugino — cousins. Fumiya came to live with Eiji’s family when he was kid and Eiji, who is one year older, has always played the role of big brother and mentor. One mentoring session in the art of kissing has awakened Fumiya to new feelings but Eiji only sees Fumiya as a little kid… right?

Sex Shown:
Mostly kissing. There are a few pressed bodies and suggestive positions but that’s the extent of it.

Review:
Communication is a good thing. All three couples suffered from a severe case of “lack of communication”. They were more obsessed with spying and eavesdropping and being jealous rather than actually talking to their partners.

That aside, or maybe because of it, I liked the stories. All three were typical couples — jumping to conclusions, assuming the worst, and thinking there was someone else. This manga is definitely on my re-read list.

All three couples were varied, not only in personality but in appearance. It’s kind of rare to see a manga artist who feels the need to make their characters look different. Even something as simple as a different hair color goes a long way (even in black and white).

So, I recommend this story and look forward to reading more from Maruya-sensei.