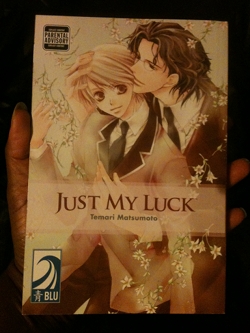 Just My Luck by Temari Matsumoto

MECHANISM OF LOVE
A reclusive toy maker is given an android to help him work through his people-phobia. But can touches from fake hands prepare him for real love?

SCHOOL UNIFORMS AND YOU
Sugiura is a student who has attracted the attentions of Ogasawara-sensei, a teacher with a school uniform fetish. But Sugiura doesn’t know if sensei likes him or the uniform.

THE RUMORED PAIR
Hiroshi Akabane and Seiichi Aoyama are being mistaken for a couple. Then again, it might not be a mistake.

Review:
This is a cute, quick read. Of the four couples presented, the couple in MECHANISM OF LOVE has the sweetest story but Sugiura and Ogasawara are my favorites. I would have liked more from THE RUMORED PAIR, but I love the way it teased and then ended. Any BL fan can pretty much guess how the story will go.

There’s not much to say about this manga. It’s straight forward and for entertainment purposes only. No deep thinking involved. Just enjoy the characters as they struggle to come to terms with their relationships. I would say this is an average BL manga.