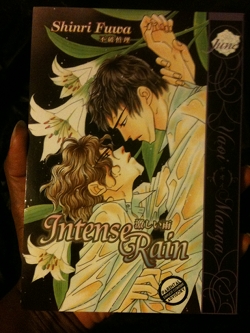 Basic Premise:
INTENSE RAIN
Takaaki Baba is a player with a new target in his sights, Ryuuji Aoyama. Their relationship starts with the normal trap. Ryuuji tries to fight his attraction but Takaaki can be very persuasive. However it seems like Ryuuji is the only taking their relationship seriously.

THE KEY
Takaaki and Ryuuji are reunited after five years. There are still regrets and bitter feelings between them, but a keepsake from the past might be able to bridge all that and bring them back together.

ADULT CIRCUMSTANCES, ADULT NAIVETE
Ryuuji is still uneasy and distrustful of Takaaki. The past is hard to forget and evidence keeps piling up against Takaaki. There’s only one way left for Takaaki to prove that he’s truly changed.

BECAUSE I SAID I DEFINITELY LIKED YOU
Kei Akigawa had a one night stand with Shindou Satoshi, a man Kei fell in love with at first sight. However, Satoshi isn’t interested in love with Kei or anyone else. It’s up to Kei to convince him otherwise.

Review:
I always enjoy player reformed stories because you see a person who is used to sleeping around and using people fall hard for someone only to be denied. After that denial, the player usually has to do a lot to earn the trust of the person they love so their relationship can progress. Intense Rain is no different.

Takaaki isn’t a complete jerk and Ryuuji is partially to blame. This story has a lot of grey area so the reader can’t place the blame solely on one person or the other. Sure miscommunication and assumptions of guilt make up most of this story, but it was still fun seeing Takaaki and Ryuuji struggle to be together and stay apart.

The story of Kei and Satoshi is cute, a little sad and full of stubbornness. It’s a yaoi plot I’ve seen before, but I liked this version of it.