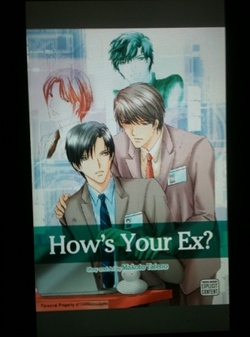 How’s Your Ex? by Makoto Tateno

Note: Picture taken with my iPhone from my Kindle.

Basic Premise:
HOW’S YOUR EX?
Tokuhara Yoji despises being touched by men, which puts him in a difficult position since he’s gay. The blame for his condition lies solely with his ex-boyfriend Saijo Tomoe, who broke it off with Yoji without warning or cause. When the two are forced to work together after a company merger Yoji finds out his feelings still exist but Tomoe isn’t willing to reciprocate… or is he?

DO YOU WANT THIS BROKEN HEART OF MINE?
Kagawa Yusuke is a company development engineer with a broken heart. Sasakado Hiroto wants to help Yusuke with his issue but Yusuke isn’t about to become an experiment for man known for playing the field with the ladies. Hiroto has an uphill battle ahead of him, if he’s really determined to have Hiroto.

I have to admit I wanted to smack Tomoe with a sledgehammer when he was first introduced. But then, that’s the reaction Tateno-sensei was going for. Even after the big reveal, I still wanted to smack Tomoe but with a pillow instead of a heavy blunt object. He was an idiot and doesn’t deserve someone as caring as Yoji, but they are such an amazing couple.

The second storyline with Yusuke and Hiroto was equally sweet and cute. Both men are stubborn and there are misunderstandings and they bounced off of each other so well.

This is an enjoyable one-shot that any Tateno-sensei fan will love.