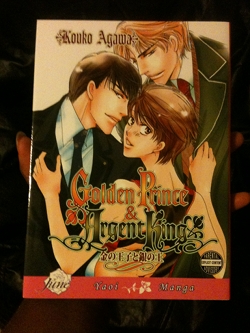 Basic Premise:
One-shot with one story.

Yuuki is the illegitimate child of a very affluent man. That man is dead and Yuuki’s grandfather’s dying wish is that Yuuki be brought into the family as a proper member despite his parentage. Now Yuuki has two older brothers, Gai and Masumi. Along with his two new older brothers comes new feelings that shouldn’t be. Yuuki is at war with his himself trying to fit in and figure out how to cope with his heart.

Sex Shown:
I don’t know why this was plastic wrapped. Seriously. The sex shown is minimal (almost non-existent) and short and not detailed at all.

Review:
Rushed. The whole plot was rushed. It could have easily been extended into two volumes instead of just one. It also felt like Agawa-san left out some stuff. As I said, the story is rushed. There were also dangling bits that needed resolution.

Other than that, it’s a good story. As I already said, if it had been longer, the reader would have had time to identify with the characters. There was also head-hopping mid-segment. I’m not used to that in a manga. Usually, perspective doesn’t flip until the new segment starts. That was a little confusing.

All-in-all, if you have to choose between this and another manga, choose the other. This is a library loaner at best.