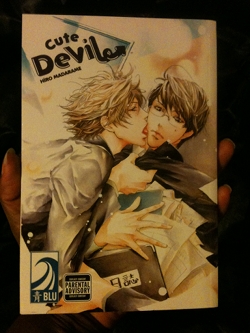 Basic Premise
Tohru Akiyoshi is the class president, good student, and a very dependable guy. He’s always been complimented on his girlie looks but has learned to take that in stride and be good natured about it. Then he meets Fuuta Naruse, a boy who is so pretty he puts most girls to shame. Tohru can only feel pity for Fuuta and avoids Fuuta so as not to get caught up in the swarm of people always following Fuuta around. Unfortunately, Fuuta has his eye on Tohru and he’s willing to let loose the demon behind his cherubic mask to make Tohru his.

Review
Fuuta is hilarious. He’s got the entire school wrapped around his finger since they all think he’s some helpless pretty boy that needs looking after. Fuuta is actually trained in several martial arts and much stronger than he looks, which is why Tohru can’t get away.

Poor Tohru. You can’t help but feel sorry for the guy. Fuuta is ultra possessive and won’t take no for an answer. Tohru seems to just give in and go along after a while. Even when Fuuta gets jealous, it’s not really perceived as an act of love but rather making sure someone else doesn’t take away his toy.

While an enjoyable read, it’s not really that romantic. In the end, Tohru and Fuuta are pretty much perfect for each other, but you can see how they will end up having a nasty break up some time near, or shortly after, graduation.

Theirs will be the relationship that haunts them into future relationships until they find the right someone. In fact, this manga feels more like a fleshed out back story. I’ve read several shounen-ai and yaoi where the main character always has that past relationship that comes back to haunt him when his ex rolls into town. I can see Tohru going through the same later in life and having to overcome it to be with the person who truly loves him. Meanwhile, Fuuta would be all pissed and violent until he finds that perfect someone.

It’s good for a re-skim if I don’t have anything else better to read.