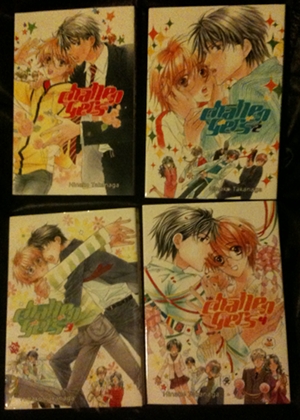 Basic Premise:
Tomoe Tatsumi is a smart college-bound student that is very straightforward about his life even though he is so naive. Mitsugu Kurokawa is a salaryman who has just discovered that he loves men — specifically Tomoe. Mitsugu is coming to terms with his new found life direction while helping Tomoe come to terms with his part in the relationship. Add to that Tomoe’s over protective older brother bent on riding the world of all gays, especially the one seducing his brother, and an American exchange student who wants Tomoe for himself and you have a real problem for this budding relationship. Mitsugu and Tomoe have a rough road ahead as the challengers keep coming.

Sex Shown:
Kissing, hugging, suggestive positions. I think this got a mature rating more for the violence than the sex.

Review:
Hinako-sensei has an interesting way of storytelling as usual. This story was hilarious. I couldn’t stop laughing and shaking my head. Poor Mistugu goes through so much to be with Tomoe. You feel sorry for him and you’re rooting for him at the same time. Mitsugu has enemies around every corner — the ladies in his office who want him for themselves, Tomoe’s older brother who wants Mitsugu dead (or in traction) for daring to lay hands on Tomoe, the American exchange trying to seduce Tomoe first, and Mistugu’s own mother who seems to go back and forth between acceptance and denial like a ping-pong ball in a championship tournament.

Of all the challengers, Tomoe’s older brother Souichi is the loudest and the most violently opposed. You think he’s just some rare bigot but Hinako sheds some light on his past and the root of his hatred in small side stories that let us know that Souichi might just be in a bout of denial of his own. His story is fleshed out more in “The Tyrant Falls in Love” (review coming later).

I loved reading this story and I’m happy to know I’ll see more of all the characters in the sequel starring Souichi. There was only one real problem. The translators were trying to keep the accents of certain characters and it made it hard to read. I had to slow my progress so I could spend time interpreting. Mildly annoying and I dreaded when those characters appeared.

Other than that, fans of Hinako-sensei will enjoy this latest installment.