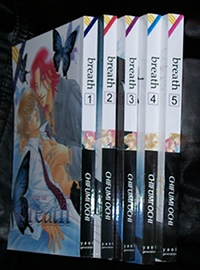 (Note: Picture taken with my Kodak camera of books from my manga library.)

Basic Premise:
Kohshi Yanagi just had the best night of sex followed by the worst morning after. He was snubbed and left wondering what he’d done wrong. Just when he was getting over it, the object of his pleasure and annoyance resurfaces — Arata Kirishima, the twin brother of Kohshi’s on again, off again sex friend. What are the chances? Kohshi wants to know Arata’s deal and ends up falling for him, but there is more than simple denial spurring Arata to deny Kohshi. Danger is around the corner for this couple if they aren’t careful.

Review:
Chifumi-sensei pens a wonderful story. There is heartbreak and happiness along with betrayal, blackmail, and deep love. Every character is fleshed out with back story that doesn’t bog down the plot and gives the reader insight into the characters.

Each character was awkward/flawed in their own way. This series is on my re-read shelf. I think the thing I love the most about this story is that there are no unanswered questions. Chifumi-sensei covers everything, whether through flashbacks or an extra side story.

There is an HEA for all involved, even if you think certain characters don’t deserve it. The fact that the character undeserving of it got an HEA as well, added a wonderful sense of closure to this story.