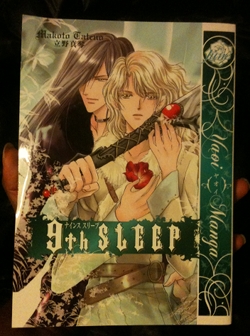 Basic Premise:
Luke is a product of immaculate conception — his mother was a virgin when she became pregnant with him. He’s 15 when he finds out he has an older brother, Malchus, who wants to see him dead. What Luke thinks is a lie is actually the truth when he realizes he’s a reincarnation of a god who came to Earth to escape doing battle for his throne with his own brother. His route of escape is to be reborn through the bodies of virgins over and over. But the time is coming when he will no longer be able to escape the coming battle.

Sex Shown:
Nothing to report because there is no sex. There isn’t even kissing. A few nude bodies but nothing sexual about them.

Review:
Shenanigans! This is not a yaoi. It’s not even BL. Makoto-sensei even says in her afterword that this was never meant to be a BL, just a fantasy story that she wanted to write.

Luke and Malchus are truly brothers and there is nothing sexual between them whatsoever. They are emotionally close but it’s familial love ONLY. This story is a fantasy adventure. That’s all.

That said, it was a good story. Sad and heart-wrenching until the end, Makoto-sensei remains a storyteller I enjoy reading. I would LOVE to see a romance story (BL or otherwise) featuring one of the brothers as the lead but I’m happy with what I got.