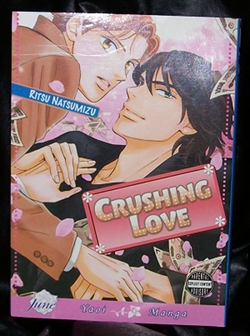 Note: Picture taken with my Kodak camera from my manga library.

Basice Premise:
CRUSHING LOVE & LOVE LIFE
Keiichiro Kuroda is in the position to get revenge on the man who stole his money and broke his heart. Kaoru Otowa is the man who can make Keiichiro’s revenge a reality, though Kaoru is unaware of that fact. Keiichiro is all set to get back at the lover who jilted him until he realizes a new love for Kaoru, but how will Keiichiro tell Kaoru the truth?

PURITY AND TYRANNY OF LOVE & LOVE OF A TYRANT KING
Sei Aoyama is the son of the people who serve Yukihiko Shingyoji’s family. Sei and Yukihiko have been friends since childhood. Sei harbors a deep love for Yukihiko, but Yukihiko is a playboy who is never serious about anyone. It’s a love with no future and Sei is ready to move on, assuming Yukihiko let’s him.

MY THROBBING HEART
Kimijima and Nakahara are classmates and sex buddies. Nakahara thinks their relationship is pretty straightforward until he finds a love letter Kimijima has written to an unknown person. Feelings of jealousy rise up in Nakahara and he realizes his relationship with Nakahara might not be as simple as he once thought.

LOVE LOVE ME
Adachi and Himura have been sex friends for six months. Adachi wants more but is afraid to confess his feelings since Himura might leave if he does. Things can’t stay the way they are but Adachi isn’t sure how to change it and he’s running out of time.

Review:
Ritsu-sensei likes flashbacks. She puts the reader in the middle of the story to start and then fills in the blanks as the story progresses. This isn’t a bad thing when done well and Ritsu-sensei did it very well.

Keiichiro and Kaoru fell in love pretty quickly. I wanted more from their story but what I was given was very sweet. They could have easily carried the whole book.

Sei and Yukihiko have a tried and true yaoi story that never gets old.

Kimijima and Nakahara’s story as well as Adachi and Himura’s story were just the right length to give the reader a satisfying taste.

All four couples were featured in emotional stories that presented a lot of depth for their length. This was a fun read that is sure to be a re-read.