As of 31 October 2016, Yet to Come (Red Velvet Christmas) — Urban Fantasy BWWM Romance, MF — is no longer available for purchase through Changeling Press. The rights have reverted back to the author (me).

This title and the others in the Fey Holidays Series (as I call it) is slated to be re-released. They’ll be revamped and expanded on to make the series longer and the world I built richer. When it’ll be re-released is up to my writing queue. 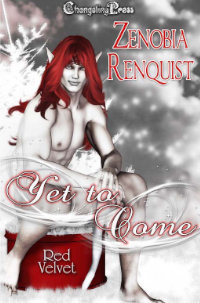 He’s so bad and so good for her at the same time.

Rae is a ghost of Christmas future. Her track record for making people see and turn to the light is unblemished, except for one man. Zane has hit her list for the third and final time. The incentive he wants to be good is one she refuses to give him. Rae cannot be with a man who allies so easily with bad, but her desire demands she not be without him. At sunrise Christmas morning, her powers fade and with them any chance she has of seeing Zane again unless he can convince her the best is yet to come.

Rae stared at him with her mouth open. No sound could express the bliss raging through her. She clenched around Zane’s dick, ushering it deeper. She wanted him to move. When Zane lifted her, she drew in a breath of anticipation. He held her above his dick with his crown penetrating her channel, and then stopped moving.

It took Rae a second to register the situation. She wiggled but didn’t have the position or leverage to complete the contact. “Zane?”

He lifted her higher. His tip pressed against her entrance. “Say it.”

She had power that could bring Zane to his knees, begging for forgiveness and promising to repent. Men and women more powerful than Zane wept in the corner at the thought of seeing her again. She was the most effective Ghost of Christmas Future in the history of the office.

Why then did one solitary human have the ability to render her so helpless? Zane wasn’t any human. He was Zane. The way her pussy drooled over his dick revealed how much she wanted him. No other man elicited this reaction from her. She’d searched for one and failed.

Zane was the archetype against which she judged all others. None had come close.

She whispered, “I want you.”

She let out a cry of pure pleasure when he started pumping his hips. This. Nothing but this. He fit her perfectly. Each stroke made her want more. She would never get enough of this man. They could continue into eternity and she would call that a good start.

Eternity. The thought shook her to her core. She stared into Zane’s eyes and saw something there. Something she didn’t understand; didn’t want to understand.

Hearing Zane say her full name made her want to respond in kind. A light glow surrounded them. She’d heard of this. The binding. When two souls met and mated, sharing their true selves and their lives — fey marriage.

Not to him. Rae felt words forming and bit them back. She would give into her desire but not that. Never that.

Zane asked, “Is that your name?”

“It’s beautiful. Raevyctorilysse.” He chanted her name as his dick massaged her pussy.

The magic built. She felt it calling to her, compelling her to complete the spell. Rae clenched her jaw, denying Zane at the same time she accepted his body. This was all she was willing to give.