As of 22 October 2016, Heart’s Fall (Trick or Treat) — Urban Fantasy BWWM Halloween Romance — is no longer available for purchase through Changeling Press. The rights have reverted back to the author (me).

This title, along with the other Fey Holidays Series (as I call it), is on my re-release writing queue. The series will go through some tweaks first, however. 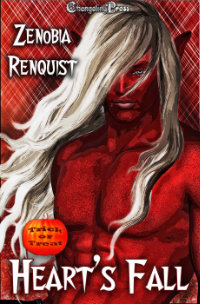 The trick to love is never letting go.

A simple Halloween tradition turns into more than Vivian or Cala anticipated. They thought their wild midnight romp was a one time thing, but the deep longing for each other that remains says otherwise. Fey magic is ready to bind them together forever, assuming they can find each other again.

“If you wanted to be head of House Hallowed Eve, you shouldn’t have donned the Autumn mantle. That was your choice. The duties you now shirk to search for this unknown girl are not a choice.”

“She isn’t unknown.” Cala knew so much about her he thought he would drown in the knowledge. The sound of her passion, the way her body tensed as she neared the peak of her pleasure, the gentle brush of her lips as she laid them against his skin, the rippling texture of her silky braids running through his fingers, the —

“What?” He’d been so lost in thought that he hadn’t heard his father’s words correctly.

“Her name, Cala. Tell it to me. If you know so much about her, tell me her name.”

Cala gritted his teeth. “You know I cannot.”

“Of course not, which is why you are in this state.” Mori gestured to Cala’s obvious arousal. “This as well is the fault of your rash behavior. I should have never allowed you to become head of Autumn Clan. You are too young, too immature.”

They would go round and round with this conversation if Cala allowed it. He didn’t have time for this. Every second that ticked by lessened his power. Autumn was ending. He had until the winter solstice to find her. As the head of a season clan, he could only interact with the humans during his season. That was the agreement all those of the four season clans had made.

He shook his head as desperation clawed up from the dark place he’d shoved it, threatening to make him give up. “Had I let the magic come –”

Cala glared at his father’s amused expression. “I thought the binding magic was stronger than any other. Why did it fail with her? Is it because she was not truly my one?”

“I’m sure she is. You said you felt the magic start. That is your proof. There exist past accounts of those whose lust and craving for fulfillment overrode the magical binding. It would seem that is what happened to you.”

That was exactly what had happened. Cala remembered feeling an urging, like someone pulling on the reins of horse to slow it. He hadn’t wanted slow at the time. He and his would-be mate had thundered on to climax after climax, wanting satisfaction more than the binding magic. As a result, they were lost to each other.

His ears drooped more. And there it was. He’d lost her. Billions of humans on the planet, millions in the country where she lived — without her name, he would never find her.

He shouldn’t have ignored the urge to take her, spirit her away to his home where the binding magic could have taken hold after they had exhausted themselves. They would have had time. Only the sounds of her friends searching had stopped him. It had never stopped any of his predecessors.