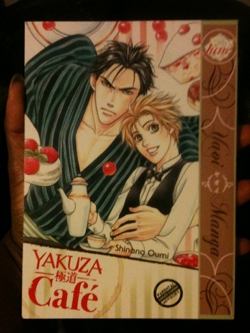 Basic Premise
YAKUZA CAFE & TWO ROADS DIVERGE
Shinri has finally been reunited with his estranged father, a former yazuka clan boss who has gone legit and opened a coffee shop in order to welcome his son into a proper family. Shinri is eager to help out at the coffee shop and make it the best it can be, but there are those who want the clan to go back to the old ways. When they try to harm Shinri, they awaken the sleeping dragon in Mikado, Shinri’s bodyguard. Mikado will keep Shinri safe from all harm… though his dragon has other plans.

THE CRIMSON SEAL
Zaouji is the most loyal member of the Fujisaki clan. He owes his loyalty to one man. The man who taught him the value of himself and of pride in family. His first love–Kurahashi-san.

Review
This needs a second volume!! It’s not fair to leave the story where it ended. I want to know more. There’s so many stories to be had from this café. It’s such a great idea and it could have lasted at least three or four more volumes. *sniffle*

Suffice to say, I loved this story. It’s too cute. Mikado’s issues with his tattoo and Shinri’s innocence are so endearing. You can’t help but fall in love with them. This is totally a keeper. I wish and hope Oumi-sensei revisits these characters one day… hopefully soon.

For those who want a cute, uncomplicated story that leaves you wishing for more, this is a must read.