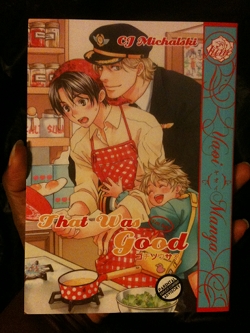 That Was Good by CJ Michalski

Basic Premise
THAT WAS GOOD!
Hiroto has just been roped into becoming the live-in housekeeper of Suguru — a playboy pilot — and his young son Mamoru. Hiroto thinks this is a dream job until his boss starts coming on to him. What’s worse, Hiroto isn’t turning him away.

I LOVE THAT PART OF YOU
Youhei is hot, charismatic, and beloved by all except for Takumi who is only interested in the hero of his favorite manga. Youhei discovers the lengths he’s willing to go to and the hobbies he’s willing to adopt to win his first love.

EVEN IF I MUST SACRIFICE MYSELF
Riku’s twin sister has plans to elope, but the brother of her intended is getting in the way. When a case of mistaken identity leads the brother to take the wrong twin, Riku uses the opportunity as a distraction… but who exactly is being distracted?

Review
Of the three stories offered, I prefer the title story. Both stories were fun reads, but the title story was much more emotional and thus more fun.

Poor Hiroto just gets swept along by Hurricane Suguru and he can’t help falling for the guy. Toss in a cute kid and nosy brother and the story is sure to be loved by many. I’m really starting to like the live-in/part-time housekeeper storylines.

My only issue with Michalski-sensei’s stories are the lack of redemption for the seme. There are a few miscommunications that cause the seme (Suguru in THAT WAS GOOD and Kazuya in EVEN IF I MUST SACRIFICE MYSELF) to do some not-so-nice stuff to the uke (Hiroto and Riku). The uke is never given a chance to clear up the misunderstanding (thus scoring some guilt points off the seme) and simply forgives after some half-hearted apologies from the seme. It made the stories feel incomplete. I enjoy seeing the seme realize he did something wrong and thus should atone.

Other than that flaw, the stories were fun reading. Quick and on-the-surface kind of what-you-see-is-what-you-get stories.