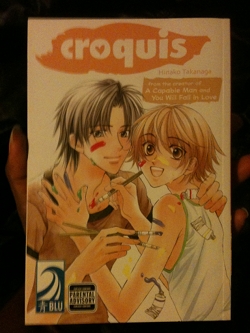 Basic Premise
Three stories in one.

The title story is about Nagi Sasahara, who is a part time model for Shinji Kaji’s college art class. Nagi is gay and knows it and has been burned many times in the past by those who have misunderstood him. He’s saving up money to make the switch so that no one will ever call him weird again. Or that was his plan until Kaji entered the picture and made him rethink his stance on life and love.

On My First Love
This is a story told in two parts — one part from Torii’s POV and the other part from Kamota’s POV. They are high school buddies whose similar taste in books has made them friends… but can they both work up the courage to become more?

Wish Upon a Star
Sei Mayama hates stars because one didn’t grant his wish when he was a child. His best and closest friend Daiki loves stars. Sei’s one and only wish is to love Daiki and be with him forever, but there’s no way wishing upon a star will make Daiki feel the same… or is there?

Review
I love Takanaga-sensei’s stuff… usually. I’m kind of ambivalent about this one. The best story of the three is Wish Upon a Star and I wish Sei and Daiki had been the title couple for that reason. Their story was cute. While told wonderfully in a short amount of time, I think they could have floated an entire volume all on their own.

On My First Love is bittersweet. I can almost see a story developing for Torii and Kamota later in life but I can also see people getting hurt because of that story developing.

And now the kicker — Croquis (the title story). WTF!? I don’t know how it works in Japan, but transgender operations in the US take a lot more preparation than simply saving up money to get stuff hacked off. There’s usually hormone therapy and mental therapy and screenings. I’d like to think someone with Nagi Sasahara’s mental mindset would never make it past step one.

I’m not arguing the right to have a sex change. I’m arguing that wanting to be a girl because girls are allowed to date boys is the WAAAAAAY wrong reason to go through such a life-altering change. That’s Nagi’s only reason. He doesn’t feel like a girl trapped in a man’s body or anything like that. He just wants to be able to date men. *head desk*

Enter Kaji who convinces Nagi (in only page, mind you) that a sex change isn’t necessary since Nagi is beautiful the way he is and Kaji wants to date Nagi with full knowledge that he’s a guy. *head desk again*

I can see Nagi had totally thought this through and couldn’t be swayed from his course of action because he truly felt strongly about… oh wait… no he didn’t. That killed the story for me. To anyone who ever struggled with this decision or knew someone who struggled, this book would not only be a wall-banger (throwing it against the wall in disgust), it would probably end up through the wall from how hard it was thrown.

Suffice to say, this is not the usual title I would expect from Tokyopop BLU. They usually tend towards the sweeter side with their yaoi and BL stories. And there is something totally weird about this book. Nothing about the story but the book itself. There were random snippets of German throughout. At first I thought it was some kind of weird onomatopoeia but then I realized what I was looking at. One quick search of my online dictionary later and sure enough, it was German.

This wasn’t one or two mistakes either. This was on several pages throughout the book. Not whole passages but a word or two at the end of a speech bubble. That was very weird and I have no explanation for it. While this has nothing to do with my review, I felt the need to mention it.