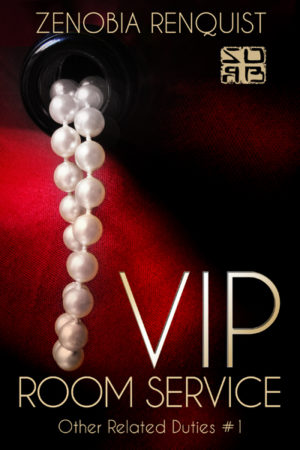 The beds aren’t the only thing she’ll be stripping…

Lexie works as a maid at a five-star hotel, and she needs every penny of her income. So when handsome guest Mr. Malena requests favors that are definitely not on the room service menu, Lexie can’t believe how tempted she is — and how much she enjoys guaranteeing his satisfaction.

But the game is up when her boss finds out. Is Lexie about to lose her job … or is she in for an even bigger shock?

Reader advisory: This 37,250-word story is for mature readers only and features submission, exhibitionism, and menage.

He cocked his head to the side and blinked. “Are you a virgin?”

“No, and that’s not the point. This is obviously a setup. I’m not falling for it. Good evening, Mr. Malena. I hope you enjoy the rest of your stay. Please don’t hesitate to—”

“Five hundred.” He added five more twenties to the pile.

“Mr. Malena, please stop offering me money. I’m not going to do it.”

“This isn’t a setup. I’m an old man looking for a little entertainment and willing to spend an obscene amount of money to get it.” He picked up the stack and fanned it at her. “On you, if you let me.”

Lexie didn’t know what to say to get through to him. She didn’t even know why she was trying. She should leave and be done. But she couldn’t deny the lure the five hundred dollars presented.

“You’re not that old. You look like you’re in your forties. Late forties at the most.”

“Bless you, my dear. For that, I’ll throw in an extra twenty.” He added it to the stack and held it out to her. “Five hundred and twenty dollars to give an old man a thrill. No tricks. No traps. No chance of getting caught.”

That line of thinking proved Lexie had lost her mind. Fatigue from a long workday had addled her mind. She needed to leave. Turn, walk out the door, and never return.

“I’m a VIP guest,” Mr. Malena said. “I could keep you here all night, and your boss wouldn’t say a word for fear of upsetting me. I’ve met her, your boss. Charming woman, if a little too stick-up-her-ass for my tastes.”

Lexie bit back a giggle. She agreed but didn’t say so.

“If she asks, tell her I wanted you to play cards with me. It wouldn’t be the first time I’ve monopolized her staff for petty reasons. I had two valets and a server in my room for most of the afternoon, and she didn’t say a word.”

“Indeed it was. I gave them all generous tips as well. Not nearly as generous as this.” He fanned the bills again. “But much more than their usuals.”

Lexie had heard Franceska grumbling about a guest ordering people to his room and keeping them. The woman had been close to chewing nails but hadn’t done anything to stop it. The rest of the staff had had to pick up the slack, getting the rough side of Franceska’s temper for their efforts.

Who was this man that he could get Franceska all bent out of shape and not suffer for it? Lexie had seen what happened when guests pissed off Franceska. The woman was subtle with her revenge. She never did anything that would make the hotel look bad, but each guest who had earned her ire had been treated to longer-than-usual waits, unfortunate delays, and other passive-aggressive ploys.

“You’re still standing here, so I know you want this money. Don’t deny it. I can see it in your eyes. There’s no shame in it. This economy has been rough. Earning a little extra money servicing a bottle isn’t the worst thing you could be doing.”

He was right. She hated to admit it, but she was considering it. If she weren’t, she would have left long ago. She glanced at the bottle.

“Have you performed for an audience before? A boyfriend, perhaps?”

She shook her head. “I don’t have a boyfriend. Haven’t had one for a few months now. I never masturbated in front of him when I did.”

She shrugged. The topic had never come up. She had toys, and her ex had known about them, but he’d never wanted to see them, not even to use a bullet for clit play during sex.

“Five hundred forty. My final offer. If I go much higher, I’ll want you to do more.”